NEWS FROM THE WALLS

The results of the competition were :

<< Stephen Richardson with his winning wall at Chapel Farm, Orton:- 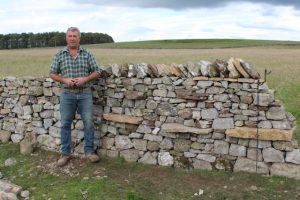 As reported in the recent emailed Quick NEWSBRIEF, we set up a ZOOM meeting of the committee oﬃcers to discuss the Protocols from the Trustees which would permit the commencement of members’ practice meetings. However, this limits the number attending to six and social distancing must be followed, in line with government instructions. After considerable discussion, it was agreed that the protocols would be too prescriptive for us to hold our scheduled members’ meetings, and unworkable for a group of mixed experienced wallers, including beginners. As you are all aware, our meetings involve, on average, a wall build of some 30 metres and we rely on an average of 15 members turning out to complete the work in a weekend. Clearly 6 wallers would not be able to complete the projected re-building for our clients. We are therefore cancelling our scheduled programme for the remainder of the year, unless the restrictions are lifted by the government, which seems highly unlikely. We have written to other branches, asking what measures they are taking and most are acting as we are. Some branches hold practice days at the same location and are not therefore time constrained.

Further, an essential element of our practice days is for the more experienced members to monitor, and, where appropriate, assist those seeking to improve their skills, in particular, new members (which generally means new members to DSWA as well as to the branch). With the social distancing envisaged in the Protocols, this becomes very diﬃcult.

Joe and Harry are investigating other possible routes to starting up our weekends: government rules, for instance, do allow charitable services and organisations to meet in groups of up to 30, provided Covid-19 guidelines and risk assessments are followed. However, we cannot just ignore the Trustee Protocols as they represent oﬃcial DSWA policy; the Trustees meet again at the beginning of September.

We are very sorry that this year has been a complete washout (literally in February of course) and that we have been forced to cancel our activities, but as with so many organisations, it was out of our hands.

Rob Ogg has written asking if anyone with at least 2 years’ walling experience would be interested in helping him rebuild 1000 metres of wall near Brampton. It’s grant work and has to be completed in 5 months.

Please contact Rob directly to ﬁnd out more, and let him know your daily rate.

Many of you will remember, with aﬀection I hope, the occasions when we went to the Parish Woodland at Skelsmergh, oﬀ the A6 north of Kendal. Can you believe it was in 2006-7? John Chapman, the site warden, contacted me to say that a small section of wall had fallen at the top of the slope – not the section that we repaired, he hastened to add! It struck us that a small group (at present no more than six of course) could go up and do that repair for him, as an oﬃcial Cumbria Branch activity, and subject to all the Covid-19 restrictions. We have not yet been to look at what needs to be done or numbers required. 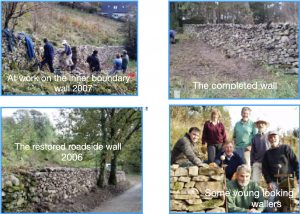 Anyone not shielding, at risk or incarcerated for the duration, who is interested in probably only a day’s walling – and good uphill walling practice – to help an old friend (who still makes ﬂapjacks, he says!) please contact me as soon as possible and we will set something up. It does not, of course, have to be held at a weekend.

And while we are thinking back to previous years and I’ve been rooting around in the archive for photographs, the ﬁrst NEWSBRIEF appeared in February 2008, although a newsletter with news of venues and meetings was on email (and by post and telephone!) from the time I started as secretary in 2005.

In that ﬁrst edition, we reminded readers of the competition to name the patron saint of walling (does anyone remember who won and with what name?); reviewing the year ahead; commiserating with Alan Hill who was in hospital having gall stones sorted; progress at Hollin Root Farm on the wall commemorating Steve Helling, the branch’s communications oﬃcer and long term supporter, who had died in 2007.
This July 2020 edition is the 73rd NEWSBRIEF