Hello to you all out there in LockDown Land! At least this month there is some news to report and a fun challenge for us all to take part in. Restrictions are at last being relaxed and while that comes as a relief to us, there is still nagging doubt that it’s all been relaxed too soon and we’ll all be incarcerated again. Let’s be optimistic and hope for the best.

NEWS FROM THE WALLS

So – first a bit of good news. The Trustee Board is to allow branch practice meetings and projects to recommence with effect from 1 July, subject to protocol guidance being followed and in line with current Government requirements. There is though a limit to the numbers allowed to attend: only 6 wallers will be need to be selected for each practice day and will have to observe social distancing and other conditions. Your committee will now have to decide how best to sort it all out! Some sort of rota system for those wishing to take part will probably need to be arranged. However, most of our weekends involve work for more than 6 people, so watch this space! Full details will be made available soon. Our 4-5 July meeting was to be at Brathay Hall and I suspect is unlikely to happen, given the short notice. Beginners’ Courses and LANTRA tests are still off limits and Trustees will discuss these issues at their 5 September meeting.

As you are aware Penrith Show, due to be held on 18 July, has been cancelled this year, but the organisers are keen to so something and has proposed a virtual Show, mainly in the animal and craft sections.
George Allonby is, as you know, very involved with the Show and organises the walling competition every year, and, indeed, will be Show President next year. He has come up with an idea! A virtual walling competition. It will be a bit of fun and might offer some respite from the frustrations we are all feeling at the moment. Your wall needs to be completed, and photographs submitted by 15 July and does not have to be completed in a day! We realise it’s short notice, so get thinking and planning! Full

details and an entry form are attached to the email with this NEWSBRIEF. entry forms back to me asap! NB There are generous cash prizes!

I asked in the May edition for stories or thoughts about lockdown and how you were surviving it. Several of you responded.

Joyce Bond, the long suffering wife of Bob, our unlicensed victualer, was planning to sort out his 14 week hair growth. Here is her poetic report > >

“Bob’s hair is growing at a tremendous rate,
But it’s all round the edges ‘neath a little bald pate!
His sideboards are massive and are needing a trim
So if I can manage to captivate him,
I’ll persuade him to come and sit down in the chair,
(I confess that I’ve never cut anyone’s hair),
With clippers switched on I’ll approach from the rear,
As he can’t see behind him I’ve nothing to fear.
Number 1, 2 or 3, I’ll ask, like a professional;
He likes the job right, and he‘s quite an obsessional.
So I think I’ll play safe and just leave it at that-
I’ll put away my new clippers and buy him a hat”

Charles White took pity on my state of health last month and wrote:

“What a bugger; you are now in the “at risk” group as a result. It must be hugely frustrating. If there is anything I can do to help then please don’t hesitate to shout, even if it’s just acute sarcasm to try to make you laugh.”

Thanks Charles! You? Sarcastic? 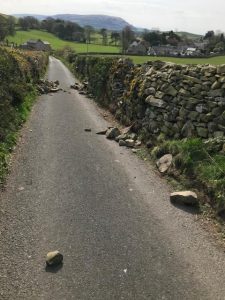 1. Andrew Mason was quoting for a repair job of some 30 metres of wall, some pulled down and all weakened by a huge oversized truck bouncing along the wall in a very narrow lane.
The insurance company tried to reduce the repair to 3 or 4 metres; a spirited campaign by the wall’s owner and backed up by photographs eventually persuaded them otherwise! “A good try,” was Andy’s comment. And the road can’t be closed so it’s an overwalling job!

2. Patrick Lacey, incarcerated as he is way up beyond Shap, wrote, “on 6 April a six- wheeled HGV carrying precast concrete, and no doubt following a Satnav, was heading down the very narrow gated road just to the west of us. Later that afternoon I saw the damage that it had caused to a gateway and gate post – along with his rear light thoughtfully left behind. United Utilities own the land and a neighbour had CCTV of the HGV and registration, but sadly neither the police nor UU have followed up with the vehicle owner.

Anyway a glorious afternoon on 7 April saw the wall back up and restored. ” 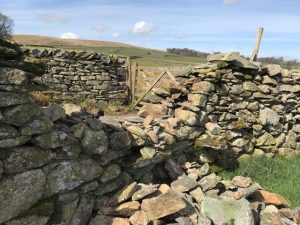 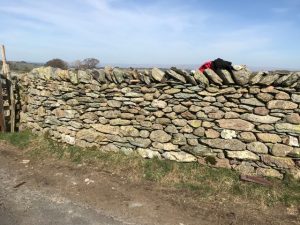 News from the office

Nominations are now open for members to consider putting themselves forward for Trustees at the next AGM in 2021. A nomination form will be on the website shortly, under

the Governance section and the closing date for completed forms will be 31 October. Assuming things will have moved on in terms of people being able to meet as groups, the DSWA Members’ Weekend for 2021 has been scheduled for 6 -7 March and will take place at the Crooklands Hotel. Make a note of the date.

The DSWA 2021 calendar is currently in production and will be available from early August, costing just £7, which includes UK postage – it does prove to be a popular item and helps promote the Association and the craft.